Singapore PMI contracts for first time in over 2.5 years

Activity in Singapore’s factories contracted in May for the first time in 32 months amid escalating trade tensions between the United States and China, joining a grim manufacturing outlook across Asia. 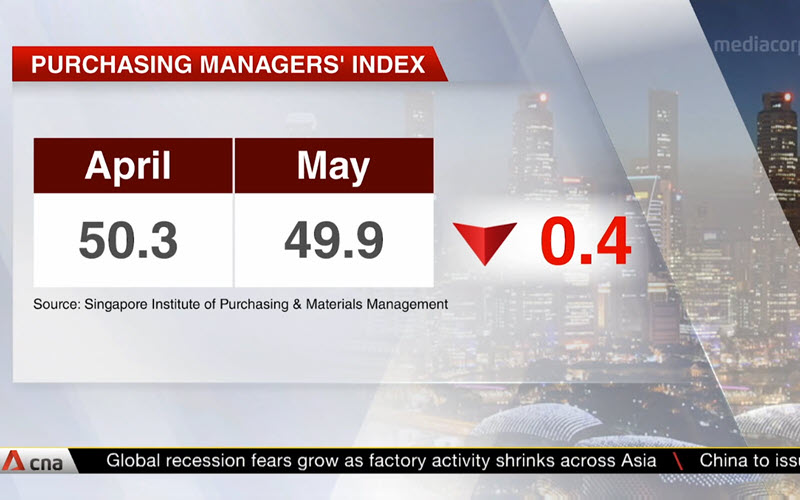 A Purchasing Managers’ Index (PMI) reading above 50 indicates expansion, while one below the benchmark line points to contraction.

The key electronics cluster further contracted for a seventh consecutive month, slipping 0.1 point from the previous month to 49.4 in May.

“Anecdotal evidences suggest that manufacturers are increasingly concerned about the escalation of trade tensions between the world’s two largest economies,” SIPMM said.

May’s bleak factory activity is in line with similar sluggish sentiment across Asia’s factories – PMIs were below the 50-point mark in Japan, South Korea, Malaysia and Taiwan, came below expectations in Vietnam and improved slightly in the Philippines, Reuters reported on Monday.

Such growth indicators are likely to deteriorate further in the coming months as higher trade tariffs take their toll on global commerce and further dent business and consumer sentiment leading to job losses and delays in investment decisions, said Reuters.

The trade conflict between China and the United States escalated last month after US President Donald Trump raised tariffs on US$200 billion worth of Chinese imports to 25 per cent from 10 per cent.

China retaliated by raising tariffs on US$60 billion worth of US imports effective Jun 1.

Adding to trade war fears, Trump unexpectedly threatened to impose a 5 per cent tariff on all goods coming from Mexico starting on Jun 10, until illegal immigration across the US-Mexico border is stopped.

Referring to “the never-ending game of tariff tag”, OANDA senior market analyst Edward Moya told AFP there were fears “we could see a global recession by the middle of next year if the US imposes additional tariffs on China and Mexico”.

0 responses on "Singapore PMI contracts for first time in over 2.5 years"