Singapore PMI contracts for third month in a row

July's Purchasing Managers' Index for the key electronics sector came in at 49.3, up 0.1 point from June but still registering its ninth month of contraction. 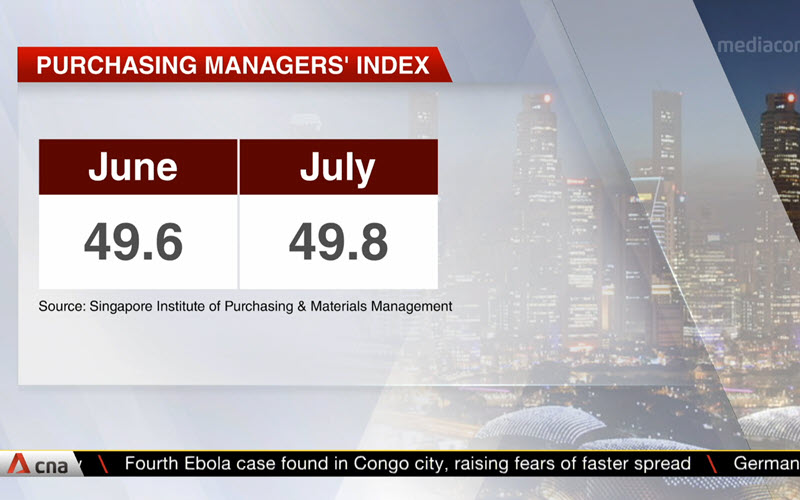 Singapore manufacturing sentiment remained in contraction territory in July, although the indicator inched up from the month before, according to a key industry poll released on Friday.

The Singapore Purchasing Managers’ Index (PMI) headline reading moved up by 0.2 point to 49.8, but stayed for the third straight month under the 50-point mark that would indicate growth.

The Singapore Institute of Purchasing and Materials Management (SIPMM), which compiles the index, attributed the slight uptick to expansion in new orders, factory output, and new exports.

The electronics sector shrank for the ninth month, although electronics PMI improved by 0.1 point to 49.3 on slower contractions in new orders, new exports, inventory, and employment.

Despite month-on-month increases, the overall order backlog index shrank for its 10th straight month in July, while the electronics order backlog was in negative territory for the 15th month.

Overall new orders returned to tepid growth, with a 50.1-point reading, but electronics new orders, though a hair’s breadth better, remained in contraction.

Selena Ling, head of treasury research and strategy at OCBC Bank, called the headline and electronics PMI numbers “nothing to shout about, as they’re both still in contraction territory”.

Meanwhile, in his latest blow to global trade, US President Donald Trump said early on Friday (Singapore time) that he plans to slap tariffs on the last US$300 billion worth of Chinese imports, from Sept 1. The rate, which would start at 10 per cent, could be hiked to 25 per cent or more.

Separately, Japan also moved on Friday to formally remove South Korea from list of trusted export destinations by the end of the month – a decision that Seoul has promised will spark a “stern response”.

The rest of the region made for a mixed bag: July PMI data broadly showed mild improvements in sentiment, although the outlook remained largely negative.

Mainland China’s private Caixin PMI, which polls smaller firms, edged up to 49.9, against 49.4 in June. Taiwan’s PMI reading came in at 48.1, better than the previous month’s 45.5.

But the mood soured in South Korea, where the PMI score dipped by 0.2 point to 47.3. And Thailand, which is still in expansion mode, saw its PMI reading slipping from 50.6 to 50.3.

Barclays economists noted that the regional PMI surveys were held after the US and China reached a trade ceasefire at the Group of 20 summit in end-June, but before the latest escalations.

Now, “recovery seems a distant possibility” in Asian emerging markets, the house researchers said in a report on Friday that noted “lingering trade uncertainty”: “The resistance of domestic demand amid the ongoing global trade slowdown should remain in the spotlight in Q3.”

OCBC’s Ms Ling, who cited the “rather downbeat” sentiments in Singaporel business expectations surveys released on Wednesday, added: “My worry is that the year-end festive season orders may not see the usually seasonal pick-up since the next tariff tranche of US$300 billion of Chinese goods will hit US consumers amid the current global growth slowdown.”

But, bucking this view, UOB economist Barnabas Gan said that July’s PMI improvements might set the stage for manufacturing momentum to bottom out in the second half.

“We expect Singapore’s growth momentum to stabilise and pick up into end-2019, after sustaining growth and trade headwinds seen especially in the first half of 2019,” he elaborated.

“We note that the rather disappointing growth and export momentum in the first half of 2019 has been seen against a high growth base… which is expected to dissipate in the second half.”

The PMI, which gauges sentiment in the manufacturing sector, is used as an early measure of industrial activity for the month. Singapore’s June PMI fell to a three-year low of 49.6, and factory output went on to drop by 6.9 per cent year on year, in a fourth month of contraction.

Friday’s PMI data for July showed the overall output index returning to growth, with a reading of 50.2, but the electronics output index lost 0.1 point to stay contractionary at 49.2.

Still, Citi analysts Kit Wei Zheng and Ang Kai Wei said in a report: “With fluidity in developments surrounding tech supply chains, we do not forecast a technical recession at this stage, which would bring 2019 (gross domestic product) below 0.5 per cent.”