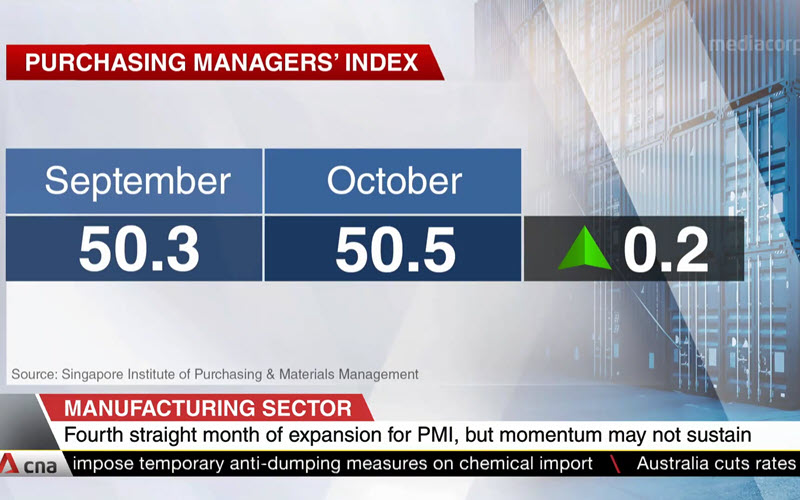 Manufacturing grew at a faster pace in October in the fourth straight month of expansion, signalling recovery, said experts.

But they also cautioned that uncertainties remain, such as geopolitical tensions and the Covid-19 pandemic which has prompted fresh lockdowns.

The Singapore Purchasing Managers’ Index (PMI) – a key measure of activity – edged up 0.2 point in October from the previous month to record a faster expansion at 50.5.

This is the highest reading since March last year when it was 50.8.

A reading above 50 indicates expansion; one below that number points to contraction.

The electronics sector also posted growth for the third straight month, with a slight increase of 0.1 point to record an expansion at 51.

But the inventory index recorded a slower rate of expansion whereas the indexes of both employment and supplier deliveries recorded slower rates of contraction.

The overall indexes of finished goods, imports, input prices, and order backlog, have all posted slightly faster rates of expansion.

Ms Sophia Poh, SIPMM’s vice-president for industry engagement and development, said: “The October PMI reading is an affirmation of the recovery for the overall manufacturing sector.

“However manufacturers are increasingly concerned about the uncertain geopolitical developments as well as new waves of the global pandemic, which could dampen global demand and thus derail the manufacturing recovery.”

United Overseas Bank economist Barnabas Gan said: “The higher readings in both manufacturing and electronic PMIs signal that a recovery is taking place, while recent high-frequency data points toward a relatively better economic environment in the fourth quarter.”

He added that while hiring sentiments continued to stay soft, there may be some nascent signs of a turnaround for labour demand in the fourth quarter as well.

“At this juncture, while the supplier deliveries gauge for both the manufacturing and electronics sectors are both improving, the order backlog index is mixed for the manufacturing and electronics. This could mean some vulnerability to setbacks on the global demand front should resurgent waves of Covid-19 infections prompt further localised lockdowns, as seen in the United Kingdom, Germany and other parts of the world,” she said.

She added that there could also be protracted American election uncertainties if there is no clear outcome and a contentious legal fight goes to the Supreme Court, which could weigh on consumer and business confidence ahead.

“That said, it is also likely that the recent lockdowns seen in parts of Europe could actually translate into higher demand for China exports as China has managed to contain the Covid-19 crisis well in recent months, and this could hopefully see positive spillover effects into the rest of Asia too.”

0 responses on "Singapore's manufacturing PMI rises to 50.5 in October"