Analysts said that the encouraging PMI readings suggest that the manufacturing sector has bottomed out and is on track for recovery this year. 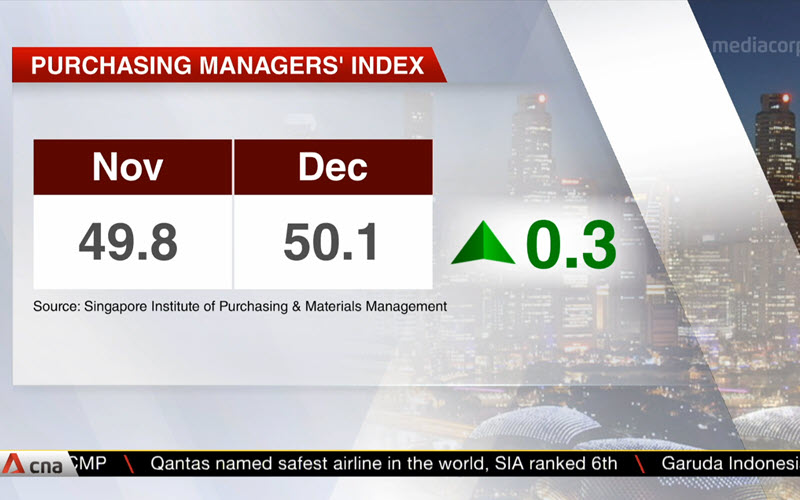 SINGAPORE’S manufacturing sentiment entered positive territory for the first time in eight months in December, a further signal that economists say suggests the worst may be over for a sector that had taken a beating from the US-China trade war.

The Republic’s Purchasing Managers’ Index (PMI) went up by 0.3 point in December from the previous month to record a marginal expansion at 50.1, according to the Singapore Institute of Purchasing and Materials Management (SIPMM) on Friday. A reading above 50 on the index indicates growth.

Economists welcomed the news as a sign the manufacturing sector has likely bottomed.

DBS Group Research senior economist Irvin Seah maintained a positive outlook but urged caution as there are still risks and uncertainty in the external economic climate.

Mr Seah said one of the key factors weighing on the PMI is the ongoing dispute between the United States and China, even though both countries are expected to sign a “Phase One” trade deal on Jan 15.

“It marks the first step in a reversal towards the pre-trade war period but we’re not there yet because all the tariffs haven’t been dismantled and they remain in place for many products,” he said, adding that much depends on how the negotiation process goes.

For example, US tariffs of 25 per cent on US$250 billion worth of Chinese goods still remain.

December’s electronics sector PMI almost entered positive territory with a marginal contraction of 49.9, an increase of 0.2 point from November, SIPMM said. This is however the sector’s best reading after 14 straight months of contraction.

DBS’s Mr Seah believes it will go above 50 “very soon” in the coming months as indicated by high frequency data.

“The trade war has prompted many procurement managers to cut back on their orders, and I think they have overcut and now have to restock their inventory level,” he said.

Mr Seah added that the emergence and adoption of new technology – including Internet of Things, artificial intelligence and 5G – are likely to drive higher demand for electronic components.

OCBC chief economist Selena Ling echoed this view, but cautioned that “the split December picture for the manufacturing and electronics PMIs suggests that the electronics cycle uptick is still trailing for now”.

Elsewhere in Asia, manufacturing PMI is also looking up for economies like China, South Korea, Taiwan and Thailand, with the latter three crossing into the black in December. Ms Ling attributed the improvement to “subsiding market uncertainty about US-China trade war subsidies”, thanks to the “Phase One” trade deal.

Barclays economists called the improvement encouraging, but said whether this points to a strong recovery remains uncertain.

“Timing difference for the Lunar New Year may also have brought forward the frontloading effect, as the holiday falls earlier this year than is usual. The timing distortion could lift activity in the near term, but some payback is likely if this is not accompanied by a demand recovery,” they wrote in a report on Thursday.

This year’s Chinese New Year falls on Jan 25, while it usually occurs in February.