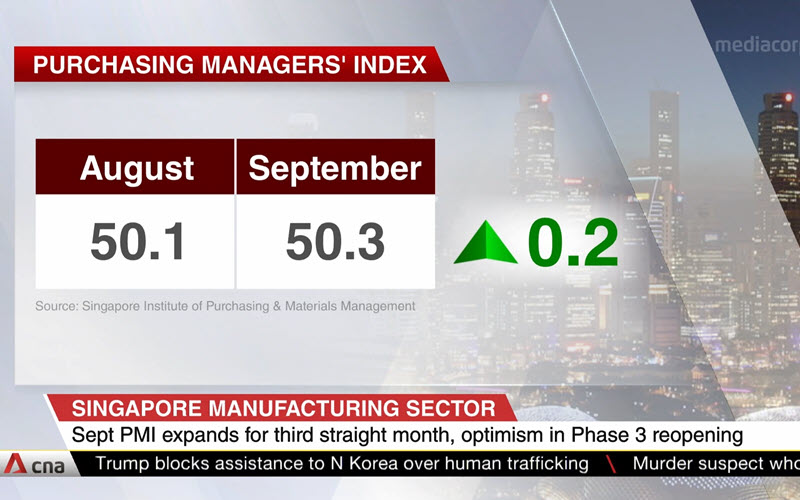 Manufacturing grew at a faster pace in September – the third straight month of expansion – heralding better days ahead for the economy, say experts.

The Singapore Purchasing Managers’ Index (PMI) – a key measure of activity – edged up 0.2 of a point last month from August to hit 50.3. A reading over 50 points to expansion; one below indicates contraction.

The electronics sector also posted growth for the second consecutive month, up 0.3 of a point from August to 50.9 and the highest since the 51.4 recorded in September 2018.

This September’s manufacturing expansion was attributed to higher new orders and faster rates of growth in exports, said the Singapore Institute of Purchasing and Materials Management (SIPMM), which publishes the monthly PMI readings.

However, it noted on Friday (Oct 2) that the inventory index recorded a slower rate of growth.

The overall employment index was also less promising, having now recorded contractions for eight consecutive months amid the soft labour market despite an improvement in readings.

On the other hand, the indices of finished goods, input prices and order backlog posted faster rates of expansion while imports posted a slower pace of increase.

“Despite continuous weak employment readings, manufacturers are becoming more optimistic and in anticipation of the next reopening phase for all businesses.”

United Overseas Bank economist Barnabas Gan agreed: “Overall, the data continues to suggest a relatively rosier economic backdrop as compared with the first half of 2020.

“The expansions in both manufacturing and electronic PMIs signal that a recovery is taking place, while recent high-frequency data points toward a relatively better economic environment in the second half.”

He added that coupled with the growth momentum in Singapore’s non-oil domestic exports, the trough in the country’s economic performance was likely seen in the second quarter.

Gross domestic product is now being pencilled in to contract by a smaller margin of 5 per cent for the year.

The Singapore economy contracted by 13.2 per cent on a year-on-year basis in the second quarter.

But he noted that the employment index suggests that hiring sentiment remains soft with the outlook for the labour market staying weak in the months ahead.

This could be especially acute given the Jobs Support Scheme that helps firms offset a portion of their employees’ wages will be tapered from the fourth quarter.

“While manufacturers are becoming more upbeat in anticipation of the phase three opening, it may be too early to break out the champagne, especially since the upcoming American elections may pose an event risk and US-China tensions persist,” she said.

Ms Ling noted that while the uptick in new orders, new exports and output gauges for the electronics sector bode well for the coming months, the traditional rush of Christmas orders this year is likely to be more subdued due to the weak global economy amid the pandemic.

“Inventory, input price and order backlog gauges are also slightly softer, suggesting that the recovery process may not be smooth sailing ahead either,” she said.

0 responses on "Singapore manufacturing expands for third month in September"