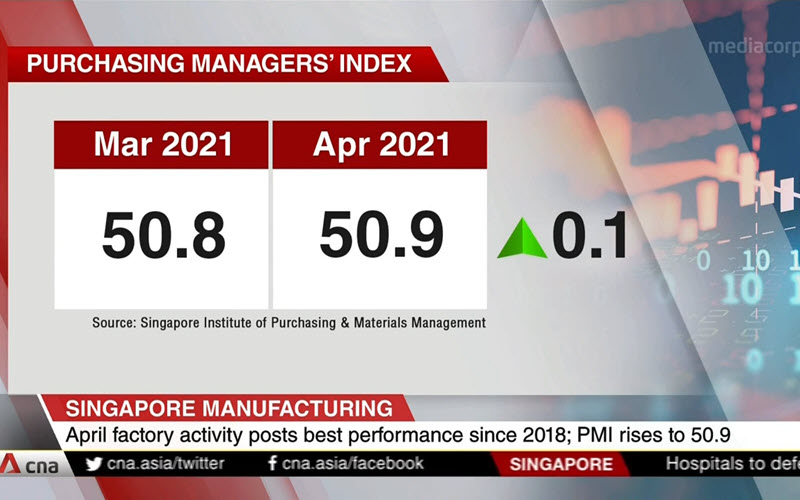 Singapore’s factory activity expanded for a 10th consecutive month in April, data released on Monday (May 3) by the Singapore Institute of Purchasing & Materials Management (SIPMM) showed.

The Purchasing Managers’ Index (PMI) recorded an increase of 0.1 point in April to post a faster rate of expansion at 50.9, the highest reading since December 2018 when the PMI was 51.1.

A PMI reading above 50 indicates that the manufacturing economy is generally expanding, while a figure below that threshold points to contraction.

April’s PMI reading was attributed to higher expansion rates in the indexes of new orders, new exports and employment, said SIPMM. Slower expansion rates were recorded in factory output and inventory, while the supplier deliveries index also posted a faster rate of contraction.

Ms Sophia Poh, vice president of industry engagement and development at SIPMM, said that while the backlog of 45 container vessels caused by the Suez Canal blockage had been cleared, “several manufacturers from the process industries are concerned about a labour crunch as a result of the recent entry ban on workers from India”.

Singapore suspended entry for all long-term pass holders and short-term visitors with recent travel history to India from Apr 24.

The move was made amid record numbers of new COVID-19 cases and deaths in India.

0 responses on "Singapore April PMI hits another 2 year high, at 50.9"