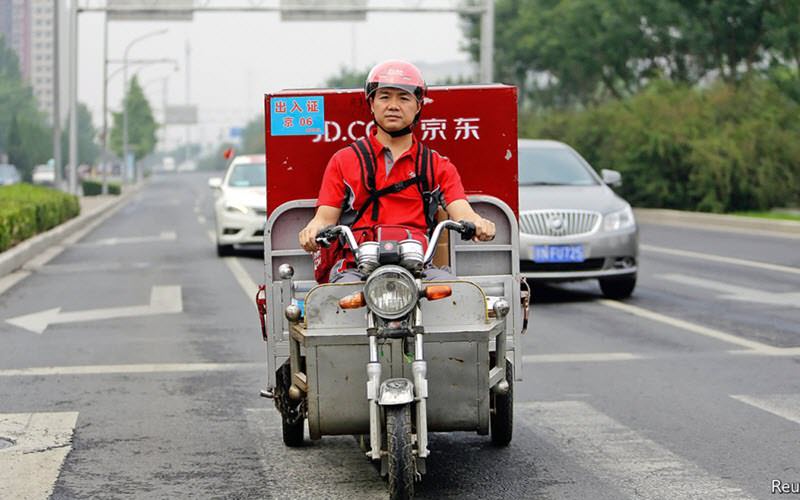 YANG MING IS standing beside his red electric tricycle in a courtyard in Beijing. A former factory worker from an industrial town outside the capital, he and dozens of other men are awaiting the arrival of a lorry. As it pulls in from JD’s warehouse, the men form an assembly line to unload boxes. They reload the packages to their tricycles and are off, weaving through the traffic. JD has about 400 such delivery stations in Beijing alone. Across the country, 2.5m couriers are at the ready to shuttle packages to their final destinations. When he first started several years ago Mr Yang made about 80 deliveries a day. Now the number is closer to 130 and still rising.

To a consumer, e-commerce’s rapid delivery seems like magic: a few clicks, and within an hour or two a package can land on your doorstep. Behind this, however, lies an enormous amount of investment, engineering and hard work as firms face ever-rising expectations of fast, cheap delivery. Delivery networks are likely to be strained as the volume of parcels grows. That is spurring new experiments in logistics, some mundane (picking up parcels in stores) and some apparently mad (Amazon patents for underwater warehouses).

In emerging markets, e-commerce has relied on an army of delivery men with relatively low wages, such as Mr Yang. In America, points out Christian Wetherbee of Citi, a bank, the United States Postal Service has subsidised the rise of e-commerce by systematically underpricing the cost of parcel deliveries. Amazon has been a main beneficiary, sorting goods by zip code in big warehouses, then delivering them to post offices to handle the last mile of delivery.

Both these things look set to change. In America, the postal service owes $34bn in defaulted worker benefits. Mail volumes are declining, which means fewer deliveries per stop, and thus even lower efficiency and more financial duress. If the post office introduces reforms, as some politicians are now asking, parcel delivery will become more costly. Labour costs are rising, too. That is no surprise in Japan, where the broader labour market is tight. But even in China, a shortage may loom: swelling parcel volumes will require 4m express delivery staff by 2020, according to Goldman Sachs. In September, BEST Inc, a logistics firm backed by Alibaba, had a disappointing initial public offering in New York, in part because investors were anxious about labour costs. Pressures on e-commerce companies to deliver cheaply will only rise, yet customers are thinly spread, making it less efficient to deliver to them than to offices or shops.

Another challenge is sorting out how to deliver packages across international borders. DHL, which with FedEx and UPS forms a triumvirate of global parcel firms, estimates that 15% of all e-commerce sales already move from one country to another. By 2020 it expects that share to exceed 20% as customers seek lower prices and a broader selection. The big carriers are keen to capture that business. In 2014 FedEx bought a company called Bongo that specialises in cross-border deliveries, to help customers with duties and protect them from fraud.

E-commerce firms are testing innovations that might help. Cainiao, the logistics network in which Alibaba now owns a majority stake, has built bonded warehouses where foreign manufacturers can store goods, duty-free, within China’s borders, ready to be shipped to consumers. Alibaba wants to build free-trade zones around the world to help small businesses with customs clearance, warehousing and financing.

Automation may lower costs. In one of JD’s huge warehouses outside Shanghai, men still operate forklifts, but by the end of the year robots will take over. Amazon’s robots already bring packages to warehouse staff. The next frontier of warehouse automation is for robots to pick individual items and put them in bags or boxes. More than 90% of such work is still done by hand. Amazon holds a regular robotics contest for automating the process. Robotic pickers may be more broadly deployed as technology becomes cheaper and labour more expensive.

Lowering delivery costs is tricky. What has been achieved so far does help, though it can seem unexciting. With the aid of machine learning, demand is predicted on the basis of past shopping patterns, weather and other inputs; that information is then used to decide which goods should be stored where. Amazon has opened small warehouses where it keeps popular products, so they can be dispatched quickly to impatient shoppers. Companies are also trying to concentrate deliveries by sending goods to central pickup points rather than to customers’ homes.

Retailers have long used “click and collect” models, though the ease of collecting online orders varies greatly from one shop to another. Now some stores are becoming hubs for online orders from third parties. From November FedEx will have package-pickup counters in about 8,000 Walgreens pharmacies across America. In Japan, both Rakuten, Japan’s leading e-commerce firm, and Amazon deliver packages to convenience stores.

Look, no hands
The most enticing ideas in logistics involve unmanned delivery. Driverless delivery trucks may one day help, and Amazon has patents for flying warehouses and drone-charging stations atop church steeples. But all such new methods have drawn scepticism. Many drones carry only one parcel, then must recharge. Asked about technological changes that might bring down costs, FedEx’s Mr Smith says, “We don’t see them on the horizon for the last-mile delivery at present.”

Once again, things are moving faster in China. Cainiao has developed a waist-high robot called Little G to undertake the final leg of delivery. JD is testing something similar in universities. Both companies expect to dispatch autonomous trucks within the next three years. Wan Lin, president of Cainiao, doubts the economics of drone delivery, but JD is forging ahead. In four Chinese provinces, drones fly on fixed routes to predetermined landing spots. A worker then carries the parcels for the last stretch of the journey. JD plans to expand to more provinces and offer more services. One of the drones being tested can carry up to a tonne.

As this experimentation continues, once again the largest players are the most likely to win. They have the cash to pour into new technologies and the volume of sales to reap the benefits from big investments. If America’s postal service were to raise its charges, Mr Wetherbee reckons, Amazon might, perversely, be the one to gain. Driven by higher charges, independent sellers that once used the postal service might turn to Amazon to handle their distribution. It has more bargaining power with logistics firms like FedEx and UPS and has recently expanded its network of delivery partners, using both regional firms and crowdsourced couriers. So Amazon would become even mightier.

0 responses on "Last Mile Delivery for the LPS Sector"