Factory activity chalks up another high in September

Singapore's manufacturing sector grew 11.2 per cent in the first eight months of the year - the highest since April 2011. DBS economist Irvin Seah said the improved reading for the electronics sector was in line with the latest industrial production data, in which electronics output surged 38.7 per cent. 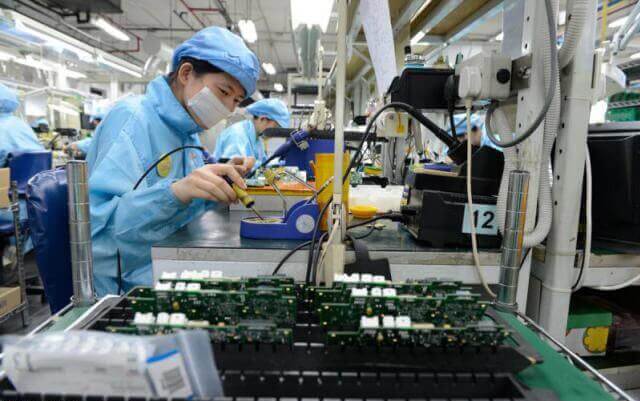 Factory activity continued to expand in September to hit a new high for the 13th straight month on the back of stronger growth from the electronics sector.

The robust performance came on the back of a rise in manufacturing employment after four months of contraction.

The purchasing managers’ index (PMI) – an early indicator of manufacturing activity – was at 52 last month, up by 0.2 point from August’s level of 51.8. This is the highest reading since April 2011.

A reading above 50 points points to growth in the sector; one below 50 indicates contraction.

The Singapore Institute of Purchasing and Materials Management (SIPMM), which compiles the PMI, said the latest reading was driven by a faster rate of expansion across all key indicators. New orders, export demand and output were all up.

The electronics sector gained 0.4 point from August to post a reading of 53.6 – its 14th straight month of expansion and the highest level since July 2010.

This was thanks to a faster rate of expansion across key indicators of the sector, although employment recorded a slower rate of growth, said the SIPMM.

DBS economist Irvin Seah noted that the manufacturing sector grew 11.2 per cent in the first eight months of the year – the highest since April 2011 – and well above the 3.6 per cent for the whole of last year.

September’s PMI reading “shows that the party is not ending yet”, he said.

Mr Seah said the improved reading for the electronics sector was in line with the latest industrial production data, in which electronics output surged 38.7 per cent.

“It seems like the rally in this cluster is not abating despite earlier concern that the global semiconductor billing figures were easing.”

Still, Ms Selena Ling, head of treasury research & strategy at OCBC Bank, added that the electronics industry “may have peaked and could be taking a breather soon”, given that the order backlog and finished goods indices have slowed from a month ago, while the deliveries index shrank after seven straight months of expansion.

She noted manufacturing activity worldwide and in the region was “generally healthy” in September.

South Korea was back in expansion territory for the first time since June, while Japan and China both recorded better-than-expected readings, along with Asean countries such as the Philippines, Thailand and Vietnam, although Taiwan, Indonesia and Malaysia posted lower readings.

Singapore’s latest PMI reading means that third-quarter gross domestic product could reach as high as 5.3 per cent compared with the same period last year, which in turn could lift full-year growth above 3 per cent, said Ms Ling.

But she added: “Our view is that domestic manufacturing growth has likely peaked in the third quarter, and should decelerate into the fourth quarter.”

0 responses on "Factory activity chalks up another high in September"